The Earth is Rich, so are the Animals and Plants… Why are Humans Poor? 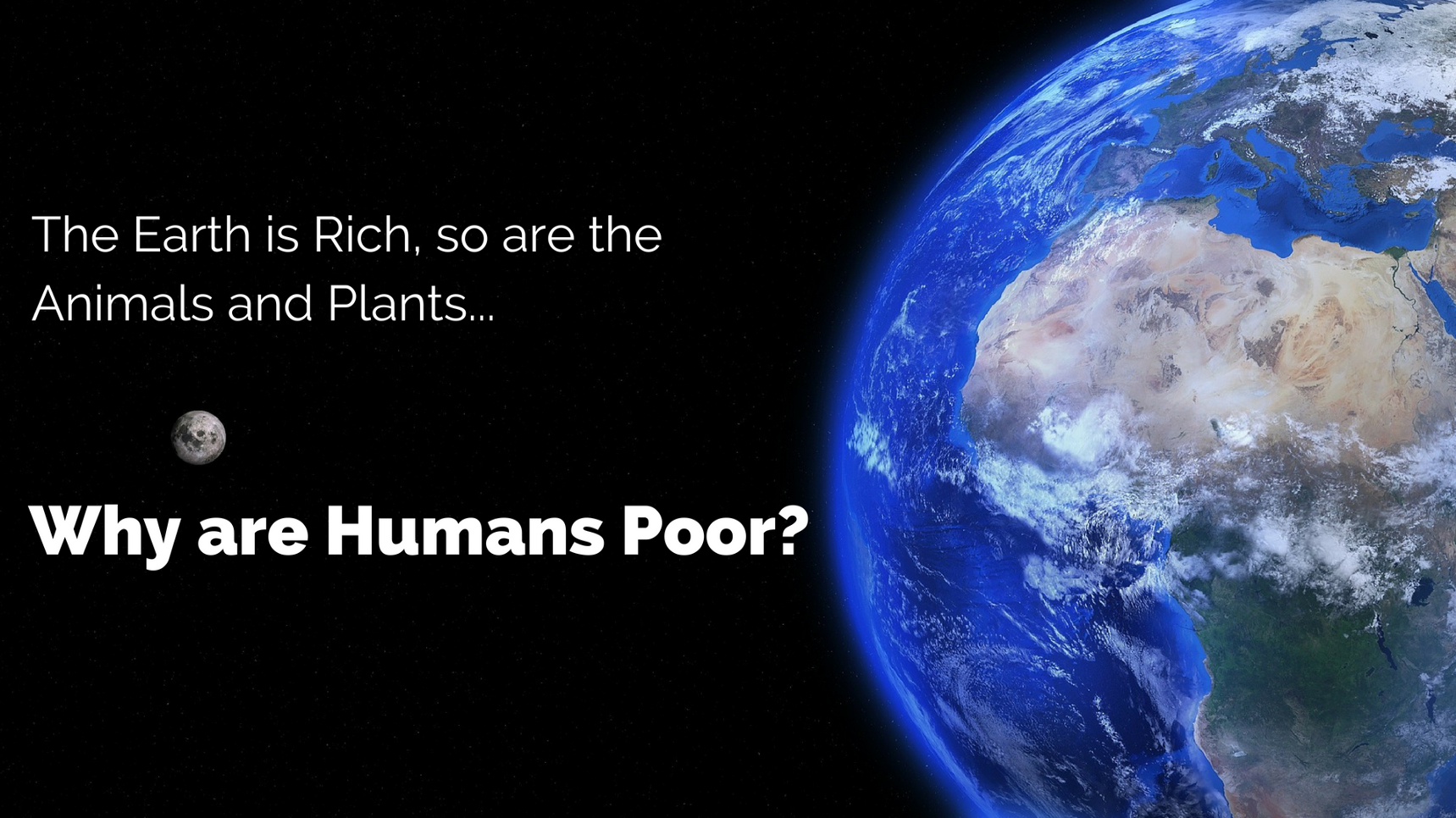 The Earth is Rich, so are the Animals and Plants… Why are Humans Poor?

Before anything comes into existence, nature takes care of its needs. Matter comes before water, water comes before plants. Milk in the udder comes before the young one is born. Still, the myth that there is not enough continues to prevail in human minds. Poverty is an output of this scarcity mentality.

From being gobbled up by fierce animals to protecting the very same animals from becoming extinct, human species has come a full circle. Humans have reached the apogee of scientific achievements, the stage of mutating genes using crispr technologies. Human imagination has created a flowering civilization on earth, and it’s ironic still so many out of their own lot are termed as poor.

Why does the Human Race suffer from Poverty?

Humans believe in perceived reality over existential reality, owing to the enormous power of their imagination. Over the period that humans have been in existence on Earth, they have tried many forms of social fabrics, from hunter groups to large democracies and monarchy, oligarchy and what not in between. In spirituality also, they have created many types of religions, sects in religion, groups within sects, etc. They missed the universal truth that human beings as a species are one. The existential uniformity and the interconnectedness of the entire species were lost in the myriad of numerous cultures.

Misusing the faculty of imagination, human beings started owning natural resources as commodities. They tried to prevent other creatures and fellow human beings from using them. They put in place barriers to the needy who were equally entitled to these resources naturally.

The truth is that the resources used by humans have their utility only to the extent of nurturing their bodies and improving their experience of life on Earth. Additionally, whatever any person accumulates or stocks up, preventing a famished person from consuming them, is in reality wastage of the natural wealth. This wastage has escalated as human beings have advanced.

Coming to the question of rich or poor, has a human being been able to produce anything out of thin air? He has always used matter available in nature and whatever he has produced again gets converted into matter over time. How can he then claim to own something when all the wealth belongs to the Earth, and the Earth is the home to everyone!

In Nature, there was a profusion of resources long before the human beings came into existence, and it will retain them long after human beings cease to exist.

The Earth is full of different elements and resources for the humankind to relish and experience. Since humans’ imagination is powerful, they invented the concept of ownership, possession, money. This is not in alignment with the principle of coexistence as prevalent in nature. The evolution leading to the fully grown frontal cortex was to understand existential reality and experience bliss. Instead, he created suffering for other human beings hoping that it was correct. Human beings are now coming to realize the futility of the same. Minimalism, off-grid community living, and Universal Basic Income, such concepts are mushrooming around the globe.

To sum up, human beings are a collective lot. They exist to share the wealth of the planet with everyone in this big family or the greater life system. Everyone should be able to feed and maintain the physical body. Everyone should have an opportunity to gather the natural produce more than his needs and share the surplus for the benefit of the greater good in society.

This is a simple and straightforward philosophy of coexistence. The Economists from Harvard and Wharton need to understand and educate themselves on this, as well as the whole world through their good offices.

Looking forward to spreading this simple Philosophy to as many brothers and sisters as possible.