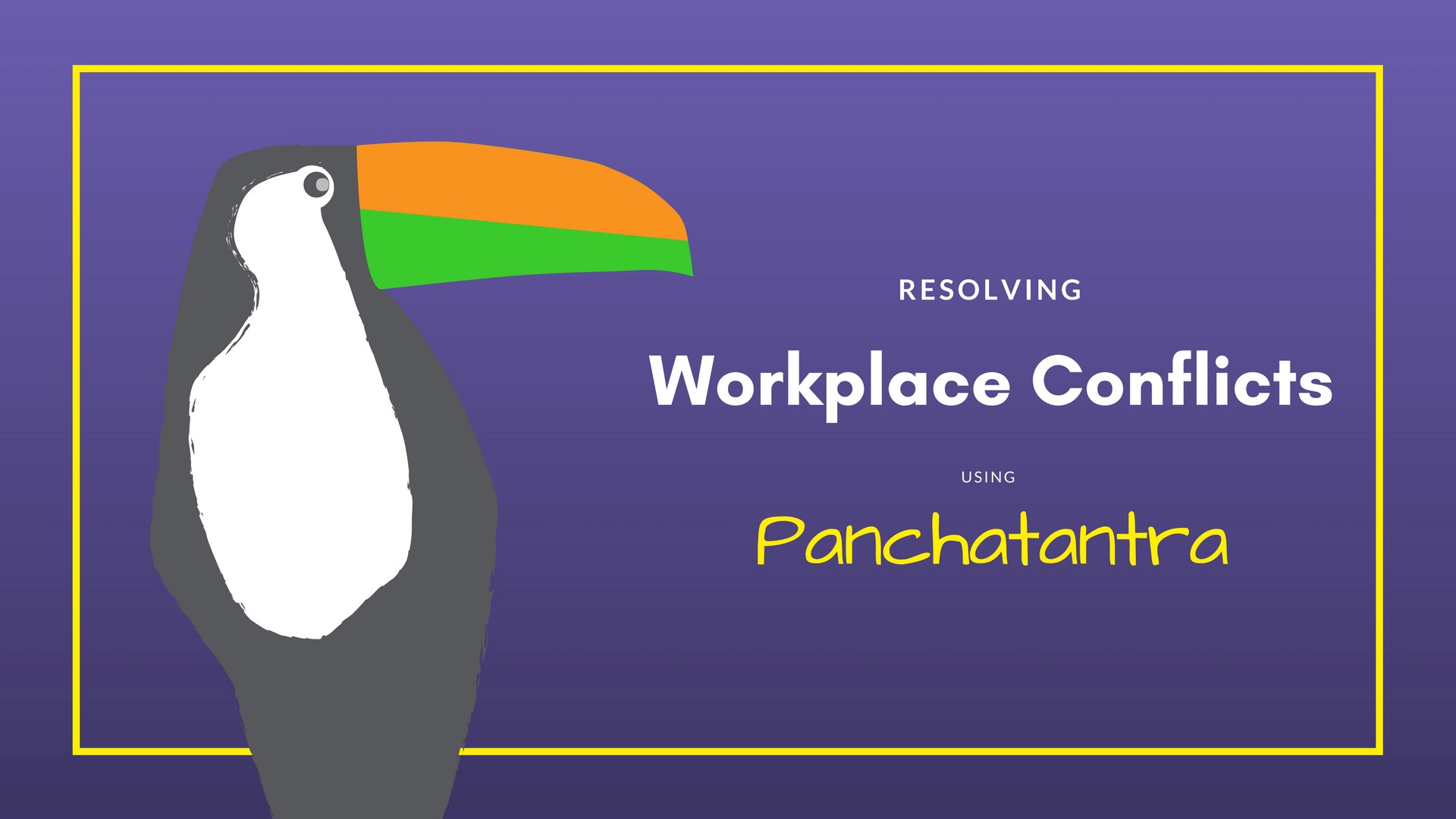 Panchatantra fables are the best-known source for learning “Niti”. They are also referred to as Niti-Sastra books.

“Niti” in English can be explained as set of strategies and principles, that are to be followed in the domain specified, so that the end results are in alignment with expectations.

Thus, “Workplace Niti” would mean conducting the affairs in such a way, so as to achieve the set goals in the workplace, given the various resources available.

In this post, I will focus on conflicts that occur during interaction between employees in all organizations, big or small.

It is not the personality clash every single time that gives rise to dissension between the employees. Sometimes, it is caused by difference in opinions and neither side willing to reconcile. Other reasons include external factors that are impacting the emotions of team members. Or it could be due to miscommunication and difference in working styles.

It’s important to know what is causing the clash in order to fix it.

1. Work out the Dispute before it Escalates

Lion and the Bull:

The opening story of Panchatantra tells us about mistrust between two close friends, the Lion and the Bull. The tale ends with death of the Bull. Two crafty jackals, who perceive this friendship as a threat to their position in the kingdom, set both the friends against each other. In rage, the lion kills the bull and mourns later.

Had both friends worked out the conflict earlier, there would have been no room left for misunderstanding. Similarly at the workplace, clashes among team members may result in outsiders getting in on the act. More so, conflict avoidance can result in increased employee stress and reduced creative collaboration. In all cases, disputes only get worse with time.

Therefore, Parties to conflict should agree to differ before the strife spreads and others are involved. The bull and the Lion can be symbolically known to represent these characteristics among the employees.

Dove, Mouse, Crow, Tortoise and Deer are five friends, each having different abilities. They come to each other’s rescue when caught in life-threatening conditions. The story begins with the mouse releasing the captured doves from a hunter’s net. Looking at this the crow befriends the mouse. The story evolves as they save a young deer and then include a tortoise to form a group of five friends.

When trapped in gnarly situations, the weakness of one friend turns out to be the strength of the others. By joining hands with each other, they are able to tackle the challenges of wild and hostile environment for a long time.

Cooperation and harmony among teams can achieve way more than internal competition could. Collaborative approach provides a safe way to bring in new ideas and ways of working into a business.

When employees have access to one another’s ideas, projects move faster and the service delivery is ameliorated. Whereas internal competition results in employees feeling pitted against one another and devoting their time and energy trying to figure out how to overshadow their peers.

A company’s success is not possible without each individual’s contributions and unique talents. Even business competitors are now embracing collaboration as a low-cost way to promote innovation and gain market access.

3. Have Right People in the Teams

Two friends, monkey and crocodile live together in a forest. When the crocodile’s wife comes to know of the friendship, she thinks to herself that monkey’s heart must be very sweet. She feigns illness and tells her husband that she wishes to eat the monkey’s heart.

The crocodile is disgusted upon hearing this and refuses to betray his only friend. The wife threatens that she will starve to death if her wish is not fulfilled. The crocodile eventually decides to bring the monkey’s heart to his beloved.

Next day, the monkey was taking a ride on the back of the crocodile. Dismayed, the crocodile tells him: “Dear friend, My wife is ill and she has refused to eat anything unless she gets to eat your heart. I have promised her to bring your heart, so I am taking you to my home”.

The monkey does not panic and tells the crocodile that he has left his heart at his home on the tree. The crocodile rides back the monkey to home and once they reach, the monkey quickly climbs up the tree to safety, away from his friend.

This story provides multiple lessons for the workplace.

Have Right People in Teams:

People who are self-assured and true to themselves make the best employees. Unlike the crocodile, they do not make poor decisions under the influence of other people’s emotions. For the most part, having right people in the teams prevents conflicts in the first place.

Sometimes overly familiar office relationships may leave the employees vulnerable to threats hiding in plain sight. Besides, when workplace friendships cross hierarchies (between unequals like monkey and crocodile) it becomes prudent to understand the objectives or consequences of such a relation.

For an organization, there is no person more valuable than the one who can react promptly and accurately at the trickiest of times. Like the monkey in above story who doesn’t lose his cool upon identifying the threat. In situations like role conflicts, heated conversations or personality clashes, staying alert at all times helps to remain calm, think clearly and sail through the challenges.

Businesses are struggling with a multitude of uncontrollable issues. From overwork and personal isolation to unethical corporate behavior and environmental damage, these are allowing workplace conflicts and stress to spring up.

The characters in stories who triumph over the most unexpected obstacles, are emotionally intelligent and psychologically strong. While those who fall prey to the circumstances, get carried away by feelings and ignorance.

Panchatantra stories are a source of values and behaviors that can help enrich the workplace life. The book emphasizes thoughtful action over impulsive behavior. The fables are full of wisdom about self-control, relationships, social success and conflict resolution, etc. that are highly relevant in today’s business organizations.