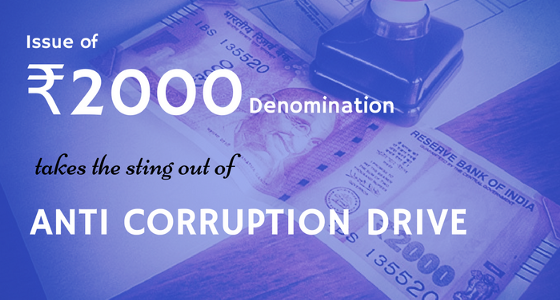 A brave bold step by honorable Prime Minister Shri Narendra Modi will go down the drain due to the issue of an alternative high denomination note. The huge fan following and high expectations espoused by people of India in their fight against corruption will become futile.

While most of the other goals like counterfeit currency, terror funding and Maoist extortions will see immediate benefits, the main objective to reduce corruption seems to have been elusive due to the reintroduction of high value currency.

The people of this great country are willing to go through hardships to remove the malady of corruption. This in itself is a nice observation that should be put on record. It is interesting to see a cross section of the society braving the hardship with a smile and standing behind Shri Modi. This should be a good pointer for all politicians that the general public is fed up with excuses and are looking for action.

Fast forward to March 2017, and there is going to be just an equal if not bigger parallel economy as the notes available now are of a higher denomination. Some cases in point:

A politician of some regional party, say Mr. Yadav was caught unaware by the sudden announcement of demonetization of currency. After the initial confusion he got his act together and set out to look for the middle men. He got accounts operatives for all his supporters. He had all the money deposited into their accounts and now has a new business added to his portfolio.

Anyone who wants help with their accounting and income problems he has a solution. His strong army of supporters now have a well oiled machine to convert black money to white and operate via the banking system, the perfect money juggling. Nowadays, in their closed door parties, they shower the dancing damsels with Rs. 2000 Notes instead of the 500 and 1000 notes earlier.

A big industrialist say Mr. Agarwal was on his Diwali vacation abroad with his family when Shri Modi fired his salvo against the Parallel economy. Coming back to India he summoned his consultants and advisors who devised a mechanism to convert the investments into smaller packets. At x% cost, they converted all their old denomination currency. They did the required paperwork and financial jugglery and soon got into business as usual. In March 2017, they are regularly paying all the major department inspectors the monthly dues in Rs. 2000 notes. All are happy and thank Mr. Modi for making things easier for them.

I can add more examples but the point remains that things will have moved to normalcy; only because of this new Rs. 2000 high denomination currency that has been introduced.

Another classical example of the the ignorance of the learned people; it is a coincidence that every time in India, when we have had a Lawyer as a finance minister we have had such amusing tactics adopted in fight against corruption. Unlearning is a very difficult task and more so for the learned men.

High denomination currency users are mostly active users of banks, digital wallets and credit cards. The money collected by taxation is put to poor use by the government machinery. It being siphoned off by the political and bureaucratic machinery is the real demotivating factor for people to paying taxes genuinely. Though there has been some improvement in the last 2 years of Shri Modi’s Government, it is still far from a situation to warrant such a big hardship on the common man.

The ground reality is that this fight against corruption supported enthusiastically by the common man, even though, facing a real tough time. Yet, nothing much is going to change. Once again the hopes of the common man will be shattered, parallel economy will remain intact and bureaucracy as it is. Look forward to better thought out and effective action next time around.