From Acquaintance to Friendship- The Missing Path 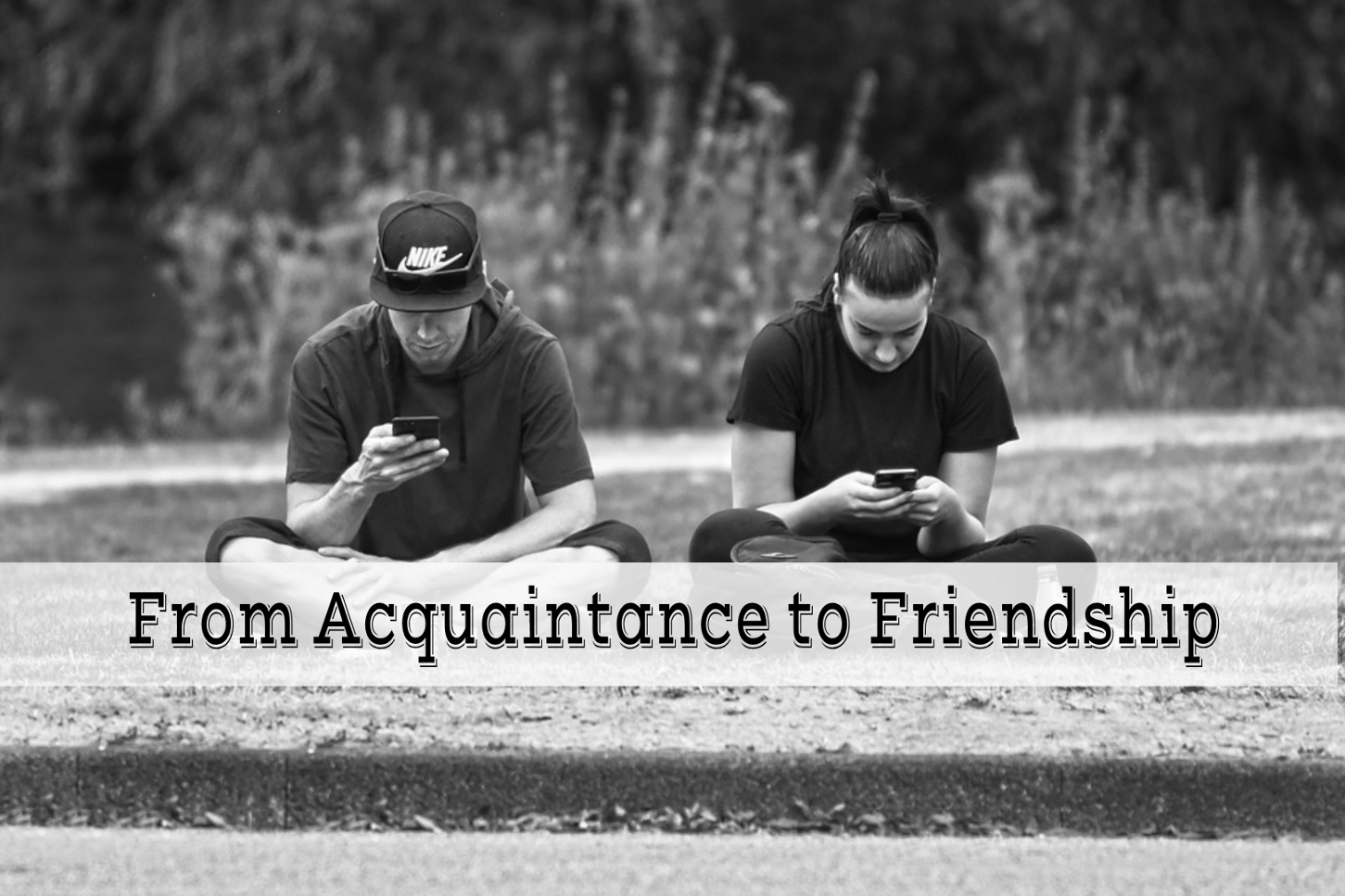 From Acquaintance to Friendship- The Missing Path

Coexistence is the reality of life and friends and family are the two most important aspects of this reality.

As social creatures, we constantly seek a sense of fellow feeling. To that end, we need friends who are going to have our backs and lift us up when we are in the dires. We need friends who hold on to us through the drudgery, who keep us afloat and make our lives better. Friendship is as important for our well-being as taking a healthy diet for the body.

When feeling low or in loneliness, we tend to scrutinize our friendships. At some point this question strikes all individuals whether they have true, nurturing friends or not! This soul-searching depresses many people as they find themselves in a desperate longing for a close friend, a chum.

As many as half of Americans- especially the young people- feel lonely, says a study. This problem is not specific to America, rather a global scenario. Quality friendships still take place but the proportion of people who are finding it hard to make friends and build relations, and are feeling lonely is way higher than before. Loneliness has nearly become a public health threat.

It is getting hard to make new friends and harder to maintain existing friendships.

Friendships aren’t lasting because we are taking individualism too far, resulting in social isolation. Over-individualistic thinking fuels the beliefs like- ‘‘I’ll do as I please, I don’t need support’, ‘I am self-sufficient, I don’t care, etc. People feel that they have conquered the world when they become more successful, happier, and more independent than everyone else. These ideas are good but we have gone too far in that direction, disturbing the balance. We fail to appreciate the role of other humans in our life and the reality of our interconnectedness with them.

Social Media fuels a distorted form of individualism, making genuine interactions harder. People are inclined toward social media because they get to project an inflated self-image. A great example being the continued emergence of social networking websites where people believe that the higher number of so-called friends one has on their page, the better off they are. Enticed by this luxury, people prefer digital interactions over real-world communication.

“Materialism” discourages friendships and relations as worldly objects are valued over human beings. People having materialistic mindset give importance to their materialistic goals over personal relations and bonds.

When we are demoted to the status of non-person in any of our relationships, disharmony and resentment arise. Sharing and shared experiencing are important in a relationship where two or more are entwining into “one”. The individual I’s are obliviated and merged into the We’s.

Due to competitive parenting, parents are focused on teaching one-upmanship to kids. They aren’t taught existential significance of human association and social belonging from the beginning, resulting in poor interactions and an inability to connect or relate to another human being.

Parents teach their young to outdo the rest, score better marks and aspire for better careers than their peers. They push them into a race kids don’t want to be a part of. Later, this comparison becomes personality trait of individuals which also triggers envy and anxiety in them. These tendencies can make the best of friendships fragile.

A person standing alone can be attacked and defeated, but two can stand back-to-back and conquer. Three are even better, for a triple-braided cord is not easily broken. — Ecclesiastes 4:12

As we grow in life, the nature of friendships change and the only way through is to change with it. The common attribute between a good marriage and good friendship is they both stop being the source of entertainment and fun after a while. Instead, it becomes a fraternity or sorority of veterans who made it through the toughest life combats together. Friends like being in each other’s company, they treasure their shared history of ups and downs in the longest run. Friendships are special without the laugh riots, without the social media ballyhoo.

Humility, understanding of human nature, and fallibility are heart and soul of friendship. Those who want to cherish the friendship of lifetime will find these attributes useful. We can achieve our destiny as human beings only when we fulfill our capacity as well as purpose for coexistence with others in absolute harmony. Do look out as to who among your acquaintances are going to become your friends in the times to come.