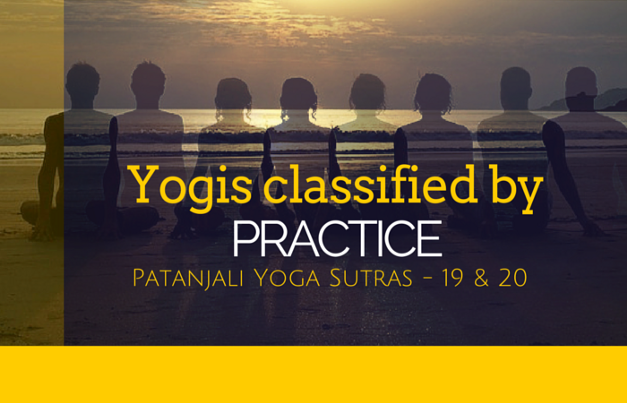 These below sutras mention the nature and characteristics of various types of Yogis. It has been explained how Yogis can attain Happiness, Bliss and Peace of mind through different means. While one class of Yogis have inborn mystic powers in them, the other class of yogis have to put strenuous efforts in order to achieve these powers.

Two types of Yogis have been described here in this sutra namely, the Videhas and the Prakrtilayas. Contrary to what has been explained till now, the videha and prakrtilaya yogis have inborn yogic powers in them naturally, without performing any yoga practice. It could be something to do with the DNA, that has potent energy lying inside.

The Vedanta philosophy mentions birth and rebirth of the soul. The presence of yogic powers in some people by birth is due to the yoga practice performed by them in past lives. This sutra is mentioning of practitioners who had reached advanced stages of yoga in previous life, but were unable to reach the ultimate state of self-realization or enlightenment to be free from rebirths.

In their next life, such yogis retain the previous achievements and learning carried forward for them. They move ahead on the path of yoga with inborn inclination. However, if someone born with yogic powers gets distracted and moves into wayward habits, then his traits go dormant and slowly get wiped out.

The first category of yogis described in this sutra is Videhas, which can be translated as “beyond the physical body”. Videha yogis have mastery over their body. Their practice is not interrupted even after the ever-occurring disturbances caused by their physical body, since they are able to move beyond the physical limits. These yogis are able to expand their consciousness out of the body and realize themselves as more than just a physical entity, in the form of consciousness. All such experiences can be undoubtedly equated with the “out of body experiences” currently being studied by cognitive scientists and neurologists.

The second category of Yogis described in this sutra is prakrtilayas. The term prakrti means nature and laya means to be merged or dissolved. So the term prakritilays can be understood as those merged with nature. Prakrtilaya yogis have renounced their attachment with the worldly happenings and have merged themselves with the natural living. They are yet on the path and would slowly move towards self-realization.

Be it any level of practice done by videha and prakritilaya yogis in past lives, they have to continue yoga in their existing life in order to achieve enlightenment. In other words, if a person has inherent yogic powers, it does not mean he has achieved the state of self-realization. He is no superior than other practitioners who don’t have such powers. As suggested by ancient scriptures, every human being, whether born with yogic powers or not has to make conscious efforts while alive, in order to achieve self-realization. It is something that can only be attained by devoted and continuous practice. Other ingredients of the recipe along with practice are explained in the next sutra.

This sutra mentions important character traits for yoga practitioners. Qualities like devotion, perpetuity, focused thought, continued concentration, application of knowledge gained previously along with a dedicated practice, are necessary to be maintained by every practitioner. These traits are very helpful in spiritual growth and support one in the journey of self-realization.

Every practitioner has to go through the path of yoga that involves strong determination and perseverance. Instead of enjoying the journey, people get awed by the daunting task and so patanjali has listed them out for easy understanding. By building on and banking on these qualities, the practitioners will be able to remain calm and serene, in spite of the continuous obstructions and repeated failures in the practice. These qualities develop a strong endurance in the practitioners of yoga.

Shraddha or Faith is the first quality mentioned in the sutra. Every practitioner should trust the practice and his journey of yoga. Shraddha is not just a normal belief, but it is a firm faith in the workings and the omnipresent power of yoga. No practitioner can progress unless firm faith is strongly embedded in the innermost corner of his mind.

Virya can be understood as Determination or Will. As the journey is long, many practitioners drain their motivation, lose out steam and give up. The path of yoga continues over various lives before enlightenment is achieved. So it is prudent to remain patient and not get demoralized because of the slow progress.

Smriti or Memory is the third essential quality. Good memory is necessary in order to retain the experiences encountered during the practice. In other words, whatever lesson one learns while yoga should be remembered. This is because most of what is experienced in practice quickly erased from the memory if attention is not paid. So recommends ability to hold the experiences in the mind. Many practitioners fail to recall the experiences and they have to start their practice from the beginning over and over again.

Samadhiprajna can be understood as the Aware State of Mind or Full Concentration. This is the last yet the most important quality that every yoga practitioner should embrace. In this state, the mind is focused on inner self. For instance, in order to achieve their aim, individuals have to stay focused and not lose sight of their important goals. In the same way, the practitioners of yoga too are required to keep an intense concentration on their goal (self), in order to keep progressing towards self-realization.

In the next sutra, it has been explained how one’s “will-power” determines the progress in yoga.