Epiphany of the Fear of Death Revealed in Yoga Sutras 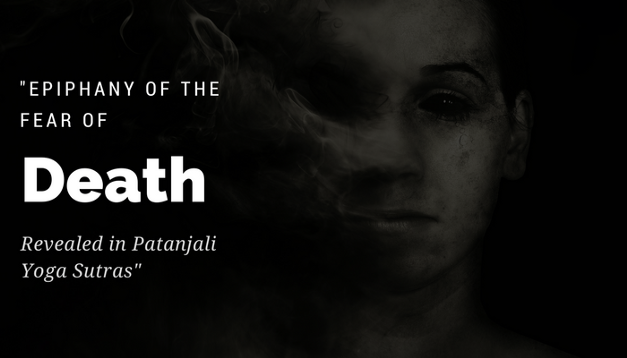 Epiphany of the Fear of Death Revealed in Yoga Sutras

Fearing death is natural. It results from lack of understanding about this obscure subject. Death is beyond the reach of modern Biology. We fear the experience of death with no clue. Death is an unsolved Mystery and every Human being is terrified to think about it.

Now a brain dead person may have normal functioning heart and other essential organs with artificial life support. What’s more, the chemical and biological processes inside some cells continue even after brain death. This means there is a possibility to reverse brain death if we can stop the metabolic and structural breakdown of cells. We can reasonably say brain death is not completely irreversible until the cells cease to live.

Death has remained a subject of speculation since primordial times. Demystifying death will begin by understanding birth.

Birth is a fusion of the physical body and the “life element”. Ancient scriptures explain the phase when the fusion takes place.

A Zygote is formed by the fusion of one out of the million sperms with the ovum. Once the Zygote is ready to accept the life element, the fusion takes place inside the womb and the expectant mother many a time can feel the event happening.

Anyone born has to die. This is how the cycle of existence works.

Fear, agony, despair, helplessness and other feelings embedded are removed.

This Sutra describes overcoming the fear of Death carried from previous lives. Death should not be feared rather its role in life needs to be understood. Accepting death helps one to realize that life is temporary and living is just a passing phase. One realizes the essence of existence and creating joyful memories becomes a goal.

The body is perishable and once that perishes it will be pronounced dead. Still, the relations, the memories, the knowledge, etc. continue to exist in society in the subliminal world explain the Yoga Sutras.

Ancient cultures of East like Yoga, Vedanta, Buddhist philosophy, etc. have always recognized consciousness. Their philosophical theory tells us that we are more than the set of operations carried out by the brain. Death cannot put an end to consciousness.

Sutra 2.9: Fear of death/clinging to life exists in everyone, both in wise and the ignorant.

Fear of death is deeply ingrained in all living creatures. It is apparent to all of us that this fear originates out of nothing else but ignorance about the nature of life and death. This fear is naturally intensified when we attach ourselves to possessions, past experiences, and relationships, all of which are transient.

Death is inevitable for everyone, still, most of us live our life ignoring this fact. That said, Human beings do have the capacity to look beyond this illusion and see the truth. Only knowledge about life and death can weed out this fear.

We are not just our bodies. We have bodies. We say, “I am 6’1“ and blond with blue eyes.” We are not that. Yet this is what we think. According to Vedanta, “we exist not because of our bodies but because of our very being”. The inner self (life element) works in tandem with the body. Death just ends the fusion between the life element and the body.

Thus, we see that once the role of Death is clear, we can lead a happy life till we die.

The aroma of Happiness will radiate from each person who has understood and conquered the fear of death.