Can Yoga Stamp out Terrorism from this World? 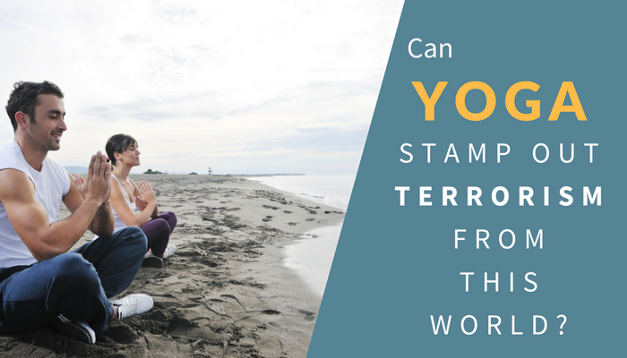 Can Yoga Stamp out Terrorism from this World?

Consecutive terrorist incursions in Europe (the recent being Barcelona attack) tell us that there is something fundamentally wrong with today’s society. Everyone is outraged and asking why terrorists are targeting innocent people? What diplomatic advantage do these terrorist organizations get?

Turns out it is not for the political benefits every single time. Extremist organizations target specific groups or communities that, they think, can pose a threat to their ideology.

In light of this, today’s investigators are examining the psychological signs, that drive fanatics to commit deadly deeds, instead of the political roots of terrorism.

“Most evil deeds are done by ordinary people, who are not necessarily sadistic.” -Hannah Arendt

Terrorist leaders are not mentally sick. They are completely sane people who measure the costs and benefits of terrorist acts, concluding that terrorism is profitable. This mainly happens at the top hierarchy of terrorist organizations. Leaders brainwash newcomers in the name of religion and use intense sentiments to overpower them. This is evident from the fact that the annual turnover of major terrorist groups is estimated between $1 to 2 Billion.

How do Individuals Become Terrorists?

Group dynamics coupled with charming leadership play an important role in convincing individuals to embrace destructive goals and use sadistic means to achieve them. Terrorist leaders provide their members with a feeling of community, empowerment and, in some cases, a means of repaying for their past deeds.

Terrorism is caused not by weapons but by the destructive thoughts nurtured and watered in the minds of terrorists. They are brainwashed, and their thought process is controlled by other beings.

﻿After the devastating attacks of 9 11, the Zen Master Thich Nhat Hanh said:

“Terror is in the human heart. We must remove this terror from the heart. Destroying the human heart, both physically and psychologically, is what we should avoid. The root of terrorism should be identified so that it can be removed. The root of terrorism is misunderstanding, hatred, and violence. This root cannot be located by the military. Bombs and missiles cannot reach it, let alone destroy it. Only with the practice of calming and looking deeply can our insight reveal and identify this root. Only with the practice of deep listening, restoring communication and compassion can it be transformed and removed.”

Personal factors are chiefly responsible for leading individuals towards a terrorist mindset. Some past events that have happened, leaving misery and painful memory, need to be handled in a very delicate manner. These thoughts are dangerous and hurt a lot. They create violent reactions and anger against the perpetrators. Terrorist leaders cash in on this opportunity and manipulate individuals to fulfill their own motives.

Once brainwashed, these individuals see the world through colored glasses that they are not allowed to take off. Individuals sacrificing their precious lives are like robots who are programmed by their chiefs very cunningly.

In their rage, individuals do not see as to what their actions will result in. They do not realize that their impulsive actions will inflict mental pain for many more years than the physical havoc that they are creating now.

Yoga to Eliminate Terrorism from the “Mind”

Master Hanh rightly said that bombs and missiles cannot reach the seed of terrorism suffused in the mind, from where it is brought to reality. To root out terrorism, we will need to strike at the base from where it generates. Studies say that seeds of violence exist not just in mind but also in the DNA of terrorists. Together with a bad childhood, lack of education and poor background, the DNA, family history or ancestral roots also play an essential role in leading one towards a violent mindset.

In plain language, Yoga works on the human mind as the system optimization software works in the computer. It fixes system errors and eliminates unwanted programs. Yoga works at subtle energy level and practitioners don’t even feel the transformative changes brought about by yoga, during the initial phases.

What Mystic Patanjali explained thousands of years ago, is now backed by scientific proof. Yoga alters the DNA and changes the way the genetic code works. It has been found that yoga reverses the molecular processes that lead to negative thoughts and cause depression, anxiety, dangerous diseases like cancer, and many other illnesses. It is now evident that Yoga is anadvanced engineering of the human psyche.

Yoga as a Lifestyle

Yoga will help the person suffering from these bouts to be able to detach himself and not get carried away to the extent of self-destruction. Knowledge and sense of detachment will overpower the feelings of hatred and guilt. Getting a holistic vision will be possible by having a versatile mind.

For individuals turning to terrorism, being dissatisfied and feeling neglected and unwanted is the starting point. Add to it the feeling where others wronged the individual, which becomes the reason for his current status getting firmly established. Yoga uproots the seeds of terrorism from their source and helps at broadening the vision and being able to take a holistic view of life. Once the self is understood as a part of the whole existence and inquisitiveness is ignited, people will stop getting carried away.

Yoga is not an activity, it is rather a lifestyle. It can help transform the thought process and improve acceptance levels.

To sum up, we can look at Yoga as a pretty useful tool to help focus on diluting the poisonous thoughts being generated by hate mongers and fanatics.