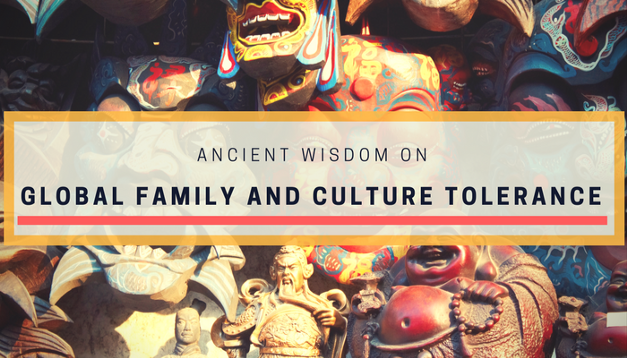 The United States has prided itself on being a “melting pot”, owing to the major share of its populace descended from immigrants. Regardless, racial prejudice remains a vexed question in the country.

There are plenty of laws forbidding discrimination by race, color, sex, etc. Still, acts of violence against black churches have occurred time after time, the most recent instance being Charleston Church shooting.

World is One Tribe

The earliest reference to the thought of global family can be found in the Sanskrit texts from Maha Upanishad- “vasudhaiva kutumbakam”. It means: “Earth is one family”. No matter how Utopian it may sound, sooner or later people from all cultures will realize the significance of this Vedic premise.

Every individual is chasing same things like, food, shelter, money, power, fame, happiness, etc. Be it any culture, ethnicity or race; everyone is running after same desires.

By the same token, human brotherhood and acceptance are same everywhere. Hostility arises with unwillingness to acclimatize to different outlooks of other cultures. If everyone valued the intrinsic similarities instead of differences, it will pave the way for a global association and help everyone get what they need.

The 2000-year-old Philosophy of Yoga explains universal Moral Codes in the form of restraints. If society at large adopts these principles, the human race will rise above their distorted world view founded on personal gains and comforts.

It will help the human race to broaden their sphere of compassion and embrace all living creatures, instead of sectarian groupism like a particular nationality, religion or race.

Translation: a) Non-Violence, b) Truthfulness, c) Not wanting what is not yours, 4) Being one with the Universal order and e) Non-attachment are Five Yamas.

Yamas or fundamental Moral Codes that essential to maintaining harmony and the sense of oneness in the human society. These are universal virtues, applicable across all cultures.

Ahimsa is the highest virtue in eastern philosophy. Ahimsa’s percept of “do no harm” also includes emotional violence caused by thoughts and words.

That is to say, an individual not only inflicts violence on others with his judgments, actions, and words, but also on himself by way of remorse, disappointment, fear, etc. All these emotions carry seeds of vehemence.

Practice of Ahimsa develops a non-violent and placid turn of mind in the person. It means no one should hurt any life form with thought, speech or act, including oneself. This is possible only through the awareness that all living beings are a manifestation of one and the same life force.

There is nothing innocent about a lie, no matter how insignificant it is. Lying or misleading others for personal gains separates the individual from rest of the existence. Such a person corrupts his conscience and disconnects himself from collective consciousness.

More so, lying leads to suspicion among human beings. It gives rise to a negative spiral in the society and has far-reaching consequences. Being honest and open, everyone can make wise decisions for the well-being of others including oneself. Truthfulness is an intellectual integrity, without which our systems, governments, and sciences would fail to function.

Every individual is born with a sense of being just. He is aware of what belongs to him as a reward for his hard work, and other things that do not belong to him.

This trait erodes as the child grows. The desire to possess more and more things intensifies with time. The individual starts associating these possessions with his identity, security and social status.

On the other hand, nearly half of the human population has a difficult time fulfilling their basic needs. Humans don’t realize that each living being has an equal share in the limited resources of nature.

Everyone should acquire and exploit these resources, only to the extent they need it. As a gesture of gratitude and a sense of responsibility towards nature, one should give back to this earth more than he receives from it. This can be done in the form of philanthropy, planting trees, conserving wildlife, etc.

4. Brahmacharya or Being one with the Universal Principle:

Brahmacharya does not always mean self-imposed celibacy. It’s about directing the energy and will-power within, instead of wasting it on an endless pursuit of external desires.

Brahmacharya is the combination of “Brahman”- Cosmic Order and Charya- “To Engage with.” This means living in accordance with the universal order. When one’s thoughts and actions are in harmony with the natural flow of life, it clears the doors of perceptions. This is followed by the realization that all life is bound together with mutual support.

The concept espoused in the Sutras is not being attached to any deed or thought. All that happens is transitory and ordained with the cosmic energy being profound. All happenings arise due to causes and preconditions.

No one can change or alter the natural order of things to match it with the life he desires. Attachment to anything which isn’t permanent means that one is going to lose it anyway. It would ultimately lead to suffering. Since the goal of all living beings is to be happy, attachment to things that don’t bring true happiness is an act of sheer folly.

The takeaway is to understand the ‘temporary nature of life’ and everything else. Perfect happiness is independent of any future or past, external events or material objects. The attachments stop being so attractive, when the individual has observed time and again that all materialism ends up doing– is causing trouble and suffering.

Human race should adopt a global behavior that is acceptable across all the societies. All the races and religions must come together to form a single culture worldwide.

In the history of 5000 years old human civilization, there have been countless wars and clashes caused by differences in ideologies and cultures. It is time now for a big social shift for the welfare of humankind.