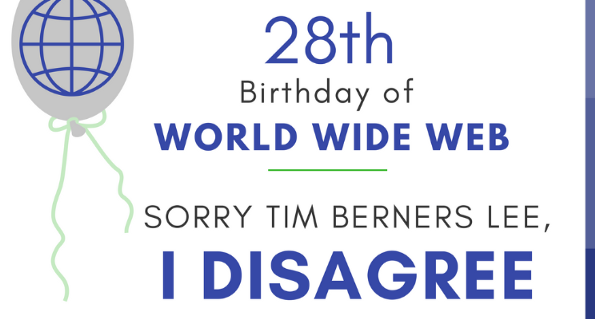 To mark the 28th anniversary of World Wide Web, Tim Berners Lee published a post on Guardian.com. Lee expressed his concerns about three emerging challenges in web that are posing threat to the users worldwide: 1. People are Losing control of Personal Data, 2. Misinformation is being spread on the web and 3. Political advertising online needs Transparency.

But here seems to be some confusion. What Lee defines as challenges facing the web, are nothing but purely side effects of this open platform. These were ineludible given the unrestricted and independent world wide web, as conceived by its founder since inception.

What is personal data? This has to be correctly understood. Once you speak something out, you can never claim it as personal. Once out of your vocal chords every audio is public.

It may seem a bit of a stretch, but both ancient scriptures as well as modern science maintain that sound once produced lasts for ever. As the sound wave travels, it expands and weakens with distance. The sound does remain in existence as vibration/energy in some sort of swinging of atoms. So technically, it can be asserted that sound is never lost. This concept has been proven by modern science in below TED talk:

Similarly in virtual world, whether it is your personal online journal, instagram photos, details you share while shopping or filling out website forms, everything leaves a mark. A personal trail is always there to trace, track and identify you. Whatever thoughts or information you have, cease to be personal the moment it is put on Internet.

Complete control over personal data in an ever open platform like web sounds conflicting. It goes against the idea of open web itself. Any data once put on web is bound to be accessed by others.

In the name of privacy, people should not be allowed to do ulterior things. Intrusions like cold calls, spam, IM messages should stop. But ideas need to propagate and not confined in the name of Privacy.

2. Misinformation being spread on Web:

What do you call misinformation? What is irrelevant information for one, might be relevant for other. The only fact is, information is in abundance and that is going to keep increasing. Besides, most of the hypotheses about life and universe remain unproven and debated. You cannot be certain of any theory in general. Everyone has their own view of the world. You cannot declare something to be misinformation just because it does not agree with your own reason.

There are no facts, only interpretations”. — Friedrich Nietzsche

Furthermore, web itself has nothing to do with misinformation. It is just a means, a tool that transfers both correct information and misinformation from its users. The web is not even the part of the problem, rather it is the human beings who by nature, upbringing (culture) and as part of society, promote or dissuade misinformation. Web is nothing more than a virtual space where the same human society, the same people exist in avatars or DPs.

Web is always and will be transparent. No single government or corporation can have exclusive control over it because if they do, web will lose its meaning. People or powers may try and even succeed for a short period of time to circumvent or influence this freedom. But in the long run, Web will free itself and become transparent again.

Likewise, Political marketing on Internet may influence people at an early stage, but sooner or later everyone will become aware of the truth and question the authenticity of information being shared. Just as its predecessors like TV, Radio, Cinema, which were used to spread propaganda and at times false information.

Before Internet, TV was the mass medium. It was also used for political propaganda, be it the Vietnam war that was highlighted over television and later condemned by general public or Iraq war coverage that is criticized to be biased. Moreover, Companies and corporations sold many products through infomercials that made huge claims about the products.

Most of these products were launched successfully and sold well in the beginning. But, eventually they were shut down or discontinued, because people realized the misleading nature of these advertisements. Now people attempting to do the same with Internet was already expected.

Web emerged as first ever experiment, which facilitated seamless connectivity and exchange of information across geographies, where regional politics has no role. It will always remain an open and independent platform allowing people to be well informed about truth. It is only after advent of web, that the idea of one world government has gained attention and support from all corners of the world.

Above points raised by Tim Berners Lee are not challenges on the part of web. These are rather maladies of human society, that have been there before Internet and will continue to plague every new invention that humankind may make in the coming future.

I am truly indebted to Lee for bringing to us the World Wide Web and for sharing his views. With all due respect, I humbly beg to disagree and hope to see more open discussion on our very own open platform- the Internet.